Skip to content
Zeppole are also known as "frittelle" in northern Italy. This pastry is made of deep-fried dough and topped with powdered sugar. They are commonly filled with custard, cannoli cream, or jelly. They are common in Naples and Rome.

Zeppole are also known as “frittelle” in Northern Italy. This pastry is made of deep-fried dough and topped with powdered sugar. They are commonly filled with custard, cannoli cream, or jelly. They are common in Naples and Rome.

Panna cotta translates to “cooked cream” and is a speciality of Piedmont, Italy. It consists of milk, cream, sugar, gelatin, vanilla, and fresh fruit. It is easy to make and delicious!

Panpepato translates to mean “peppered bread”. It is a sweet and spicy Italian round fruitcake. It is common in The province of Ferrara, Italy. The cake consists of a variety of different fruits and nuts including almonds, walnuts, hazelnut. It also contains black pepper and chocolate.

Pandoro is common in Verona, Italy. The name translates to mean “golden bread”. It is commonly coated with powdered sugar and molded into an aesthetically pleasing star shape. It is similar to pannetone but contains no fruit or nuts. It has a sweet taste and a light and fluffy texture.

Torrone is a traditional dessert in Italy. It is a nut and nougat candy that consists of honey, egg whites, and toasted nuts such as almonds and pistachios. The consistency and flavor of Torrone both vary based on the region it is from. Torrone from Cremona, Italy is quite brittle whereas torrone from Abruzzo is less brittle and contains chocolate. This delectable dessert can be given as beautiful and delicious homemade gift!

Struffoli originated in Naples, Italy. They are crisp on the outside, and fluffy on the inside. Struffoli consists of dough balls that have been deep fried. They are drizzled with honey and topped with sprinkles or candied fruit. This dessert is a delicious and traditional Christmas dessert for Italians in many regions of Italy. They are not only enjoyed by Neapolitan people but by Calabrese, and  Abruzzese Italians as well!

Semifreddo translates to mean “semi-frozen”. It refers to a class of semifrozen desserts. Some of which include chocolate amaretto semifreddo, honey yogurt semifreddo, stracciatella semifreddo, and hazelnut semifreddo. It differs from ice cream because it contains the consistency of a frozen mousse. There are many semifreddo dessert recipes that can be made easily in the comfort of your own home. 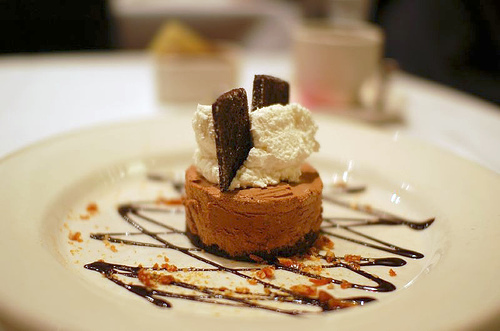 One of the most classic Italian deserts is the light, buttery, and fluffy Panettone! It is a dome-shaped cake that originated in the northern town of Milan, Italy. Pannetone is extremely flavorful as it is made with a variety of ingredients that include citron and lemon zest, candied fruits, raisins, and nuts. Today it is enjoyed by both Italians and Italian-Americans during the Holiday season! Although it is not typically made at home because it is a lengthy process, those who wish to make it can use this great recipe:   Panettone Recipe

Ricciarelli are traditional Italian almond biscuit cookies. Their origins date back to 14th century Siena which is located in Tuscany, Italy. They are made from almond flour, sugar, honey, egg whites, orange zest, and almond extract. The almond flour they contain made them naturally a gluten-free cookie before “gluten-free” even existed. They have a chewy texture and are topped with powdered sugar. These tasty cookies are commonly enjoyed with a glass of Vin Santo during Christmas time.

Cannoli are Italian pastries that originated in Sicily. The name translates to mean “little tube” describing their shape. Cannoli are made from fried dough that has been molded into a tube shape and filled with a creamy ricotta filling. Cannoli are eaten by Italian- Americans every day. However, they can be decorated and made for any occasion, especially Christmas, by simply dipping each end in green and red sprinkles, or dipping each end in pistachios and adding a bright red cherry!