Skip to content
Located in Northeast Italy, Veneto is one of the most well known of Italy's twenty regions.  Venetian cuisine is highly influenced by geography. As a result, fish is a very common dish along the coast of Laguna Veneta due to its close proximity to the Adriatic Sea. From zhesty wines like Pinot Grigio, to delicious seafood, to popular desserts such as tiramisu, the region of Veneto is home to an enormous amount of famous Italian delicacies.

Located in Northeast Italy, Veneto is one of the most well known of Italy’s twenty regions.  Venetian cuisine is highly influenced by geography. As a result, fish is a very common dish along the coast of Laguna Veneta due to its close proximity to the Adriatic Sea. From zhesty wines like Pinot Grigio, to delicious seafood, to popular desserts such as tiramisù, the region of Veneto is home to an enormous amount of famous Italian delicacies.

Fegato alla Veneziana is one common Venetian style liver dish. Tramezzini are delicious Italian triangular sandwiches made with meats and ingredients such as prosciutto, salami, eggplant, mozzarella, basil, and cantaloupe. Although these are typical ingredients, they can be prepared using a variety of other ingredients as well.

Veneto is one of the most popular wine regions of Italy. Popular wines of this region include: Cabernet Franc, Pinot Soave, Amarone, Torcolato,  Tocai Rosso, Garganega, Valpolicella, Verduzzo, Raboso, Moscato, Nero, Pinot Grigio, and Merlot. After the wine is made, the alcohol that the grapes contain is distilled to make Grappa. Prosecco is a very popular sparkling wine of Veneto.

Risotto is the most popular starch of Veneto. Vialone Nano is a medium grain rice used in many popular Venetian dishes.  Risotto is commonly cooked with mushrooms and called “Risotto ai Funghi”. “Risi e Bisi”, or Rice and Peas is another very popular rice dish from Veneto.

The more north you travel in Italy, the more prevalent the cornmeal dish of polenta becomes. Polenta is one of the most popular dishes of Veneto, and there is a very long history behind it. It dates all the way back to the time of Columbus. It was once considered a universal staple dish for the less wealthy citizens and referred to as ‘cucina povera’ which means food for the poor. Although it was once called this, it is now considered a very popular upscale dish. It can be served as a side dish in place of bread, or as a main dish typically covered with stew. Campetti con Polenta is a dish made with small fish and polenta eaten by many Venetians.

Bigoli is a very coarse and thick pasta eaten all over Veneto. Bigoli in salsa is a pasta dish consisting of salted sardines and onions. This dish was commonly eaten on Fridays and Christmas Eve. Linguine and shrimp is another traditional Venetian dish.

Bacala alla Vicentina is Venetian dish made with stockfish. Scampo, mussels, eel, and crayfish are other types of fish eaten in Veneto. Shrimp are bought during the correct season which begins in March in Veneto. They are seasoned with fresh lemons and olive oil to create a delicious dish known as Scampi alla Veneziana. Bacalá mantecato is a classic Venetian fish delicacy consisting of salted cod and olive oil. It is commonly served with polenta. 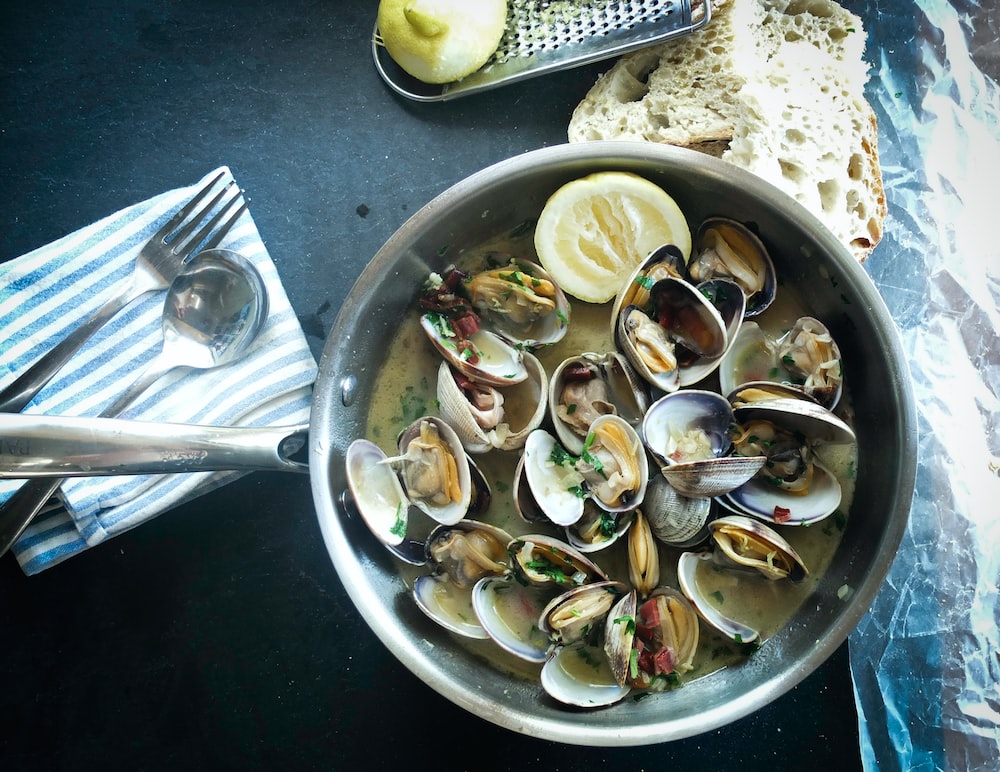 Tiramisù and frittelle are two of the many delicious deserts of  Veneto. Although there is contrary belief as to where tiramisù originated, many believe that it was in the region of Veneto in the 1960s. It is believed to have first been served at a restaurant called “Le Beccherie” in Treviso. Tiramisù contains ladyfingers that have been drenched in espresso, cocoa powder, and marscapone cheese. This delicious Italian dessert is now loved all over the world. Frittelle are Venetian doughnuts that are similar to bomboloni. These delicious fried desserts can be filled with  pastry cream, zabaione, and even chocolate custard!